Basics of a Home Network and CCTV Systems

Computers, tablets and smartphones: We all know what these are, and the important thing is that they can connect to your internet router. This means that they will also be able to connect to other devices on your home network or on the internet. So, if you have a phone and a video recorder that are both connected to your internet router, you will be able to see the footage from your CCTV cameras using your phone.

Analogue cameras: This type of camera has existed for a long time; they cannot do much more than send a signal to a recorder and receive some basic commands in return. They are very easy to set up, but they are limited compared to IP cameras. They cannot connect to an internet router independently, and footage from an analogue camera cannot be viewed without a device to process the signal. Usually, a DVR is used to do that. An analogue camera will usually use a BNC connector.

IP cameras: These are more recent players to the CCTV game, the IP stands for Internet Protocol. These cameras can connect to an internet router by themselves. They usually have better image quality and are capable of much more than analogue cameras. You can access IP cameras using a web browser without ever needing a recorder. If your camera has a microSD card slot, you can use that as backup storage so that even if the NVR is broken or stolen, the camera will keep recording by itself. As a result, they can be more complicated to set up as well. They use RJ45 connectors, which are commonly seen on computers and routers. Some IP cameras can connect to a router using Wi-Fi only, but these are rarer and have their own added complications to consider, such as getting enough signal from the router.

DVR: This stands for Digital Video Recorder. This is a device that connects to analogue cameras (using BNC connectors) and interprets their signal so that you can view it. It will record to a hard drive and can be used to set things like a recording schedule or detect motion on the camera feeds and send you a notification. Although analogue cameras cannot be connected to an internet router, a DVR can, so it is able to process the data from an analogue camera and send it over the internet to your phone or computer. You can also connect to a DVR using a web browser if it is connected to your router.

NVR: This stands for Network Video Recorder. This is a device that connects to IP cameras using Ethernet ports but unlike a DVR, the data is already processed by the cameras, so it just receives it. An NVR is similar to a DVR, but it can do more things. For example, an NVR can connect to an IP camera that is not physically plugged in to it, so long as it’s on the same local network. This is useful if you have more cameras than there are ports on the NVR (there is still a limit to how many cameras it can handle though), or if you don’t want to buy an individual cable for every camera.

DVR vs NVR: DVRs and analogue cameras are generally cheaper and easier to set up than NVRs and IP cameras, but every camera has to be physically connected to the recorder with a cable, which can make NVRs a much better option for larger and more complicated systems that span over large areas. Analogue cameras can be more difficult to mount and position as well, due to the type of cable they use. If you use a Wi-Fi bridge and switch, you can do great things like connect four cameras in a remote location to an NVR without having to run hundreds of metres of individual cables over rough terrain.

HDD: This stands for Hard Disk Drive. This is for storing data on, such as the footage from your cameras, and you will almost always find an HDD inside your DVR/NVR. Hard drives are generally measured in terabytes (TB) of data storage. 1TB will usually be enough to store footage from four cameras for a week before running out of space. However, that depends on the quality you’re recording at, how many cameras and some other factors.

MicroSD cards: These are very small cards that can be installed inside some IP cameras. This is useful if you want to use the camera independently of a recorder, or if you just want to use it as backup storage in case the recorder breaks. They are far smaller than HDDs, but you pay more per gigabyte of storage. They generally range in capacity from 4GB to 256GB. For reference, 1TB is 1024GB, so the largest commonly available SD card will have only a quarter of the size of the smallest commonly available HDD. 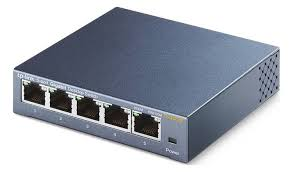 Switches: A switch is a device that has RJ45 ports on it, which allows you to connect various devices to it and it will direct the traffic from all the devices to where it needs to go inside your local network. For example, if you have a shed that’s 100 metres away from your internet router inside your house, you can run a single cable from the router to the shed and plug it into the switch. You can now connect various things to the switch, like a computer or a camera, and they will all be able to connect to your router through that single cable.

Wi-Fi bridges: A Wi-Fi bridge is a pair of devices that basically does the same thing as a cable, but they transmit the information wirelessly. This is useful if you need to send the data over a long distance or over terrain that makes a cable impractical. Let’s use the example of the switch from before, but let’s say the shed is now 500 metres away from the house and there’s a ravine filled with crocodiles in between. No problem just set up one wireless bridge at the house, and another at the shed, and the devices connected to the switch can still send and receive data from the router.

Analogue transmitter/receivers:  If you have an analogue camera that’s a significant distance away from your DVR then you can use a transmitter and receiver pair to send the signal wirelessly instead. These are similar to a Wi-Fi bridge except they’re analogue only, so they only work with analogue cameras rather than computers, IP cameras and other devices.

Internet routers: A router is the gateway of a network. It decides where the data from your computer, NVR or phone needs to go. If you are at home and you want to look at your CCTV footage, the router will see that you’re connecting to a device on the same network and route it accordingly. If you’re at work and you want to look at your CCTV footage, your phone will send a request to the router at work, which will then send data over the internet to your home router. Your home router will know that you want to get data from the recorder, and it will send it back over the internet to your work router, and through there to your phone.

How does the router know what device the data is coming from, and what device it’s going to? You need an address, just like a letter. These are called IP addresses and your router will assign one to every device on your network. The IP address for a device doesn’t always stay the same, it’s just an arbitrary number used to keep track of what needs to go where. An internal IP address will generally look something like 192.168.1.200. You only need to know about the last two numbers in an IP address. In ‘192.168.1.200’ the ‘.1’ refers to the internet provider you are using (for example BT uses .1, Sky uses .0), and the ‘.200’ is the specific device that is on the network.

Why doesn’t this address work when you’re not at home? Because this is just a local address assigned by the internet router; it will only work when you’re using the same router as the device you’re connecting to.

Your router will have a ‘global IP address’ which is what allows it to talk to the rest of the internet. If you know your routers global IP address then you can access it from anywhere in the world, but this is randomly assigned to you by your ISP and will change every time your router is switched off (unless you pay a lot of money to keep it the same, this is known as a ‘static IP address’). You can find this out by using a website like ‘whatsmyip.com’.

If you need help with anything else please check out our other guides or get in contact.

E
Elliot is the author of this solution article.